Every year, we use our AGM to reflect on the last 12months of diving and club activities. We have reports from our committee members, we give out our annual club awards and vote in next years committee. 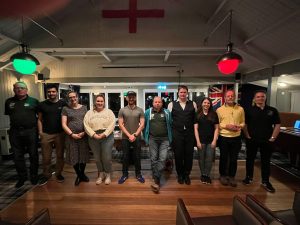 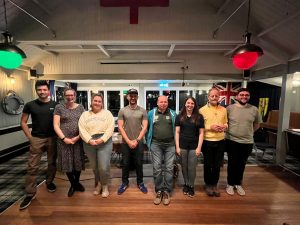 This year, we said thank you to our outgoing Dive Officer Michal, Equipment Officer Mark and Training Officer George and welcomed to the Committee Henry as our new Social secretary. We also had a few committe members shuffle positions as well as some stay in their positions:

Diving Officer will be voted in by the committee in our first meeting on the new term.

Every year we give out 2 prestigious awards for Diver and Club Person of the Year that are voted for by our members. 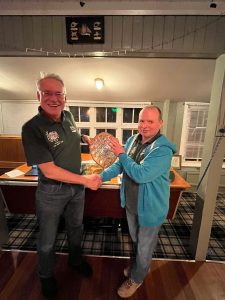 Diver of the Year is an award presented to members than have used the last 12months to continuely advance their diving skills. This years it was awarded to Mark for attending almost all of the club trips, making good progress to completing Dive Leader and upskilling with his new twin set configurations. 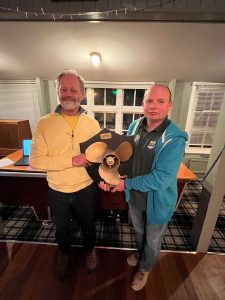 Club Person of the Year is awarded to a Putney BSAC member that has gone above and beyond and contributed emensely to the club over the last year. This year, the club voted for Steve, our Boat Officer, for all of his hard work and perservence to get our new rhib Femti up and running. Huge thank you to Steve – we’re all very excited to get out on the boat diving next season.

The final award we present at our AGM  is the Skomer Claw, presented for the biggest diving related mistake or mishap. This year, due to one mishap (that managed to not actually win the award itself) we got a new award, the Stoney Diver, for the runner up to the Skomer Claw. (To read more about where this award came from check out the Stoney Trip Report) 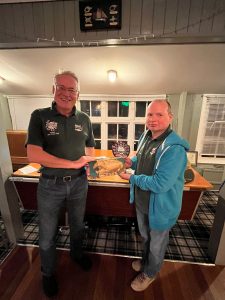 Winner of the Skomer Claw: Mark – Despite it already happening once this year, Mark didn’t learn from other mistakes and managed to take his phone to 35m on the Markgraf in his dry suite pocket. 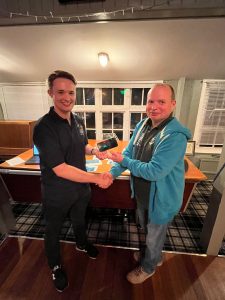 Runner Up and Winner of the Stoney Diver: George – After diving got blown out, George made the most of it in Swanage’s ‘The Club”.  But he didn’t leave much to the imagination on his return back to the hostel for his fellow room mates following a late night shower.

Congratulations to all of our award winners, a massive thank you to our outgoing committee members and good luck to this year newly elected committee – here’s to an amazing next 12months.

Our 2022 edition of the AGM photo competition was another chance for our budding underwater photographers was to submit their best photos from the last 12 months. Our club members are allowed to submit one photo to each of our two categories, UK and Abroad, these are then voted for on the night! 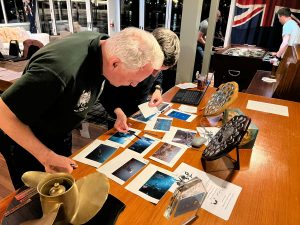 We had 7 entries for the UK competitions that really showcase both our members skills but also the incredible life and scenery the UK has to offer. It had been great to get a full 12 months of diving in after a couple of covid disrupted years!

Winner of the UK Photo Competition: Emma with her photo from under Swanage Pier 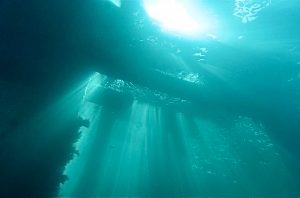 We had four submissions for the abroad category:

Winner of the Abroad Photo Competition: Tim for his photo of an Angleshark in Lanzerote 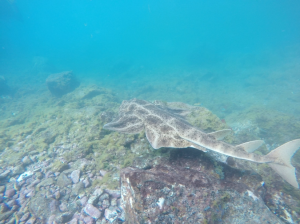 Huge congratulations to our winners Tim and Emma 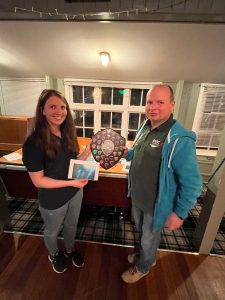 2nd November brought round out Annual General Meeting. Along with a report from each officer, we vote in the new committee as well as voting for our photo and club awards.

We have welcomed three new members to our committee: Liam (Secretary), Grace (Social Sec) and Steve (Boat Officer). Stephen takes on the new challenge of Chairman, while George moves to training officer and Emma becoming our membership secretary. Sarah, Nic and Mark continue their current positions as Treasurer, Comms and Equipment Officer. A huge thank you for Cameron, Helen, Michal, Ellie and Nick L, who all stepped down this year, for all their hard work on the committee over the years!

It was then onto the fun part of the evening – The Awards! To find the results of our photo competition – look here. After the photography awards, we go on to vote for the Club Member of the Year – awarded to a member that has made great contributions to the club across the year, and the Diver of the Year – someone who has developed the skills as a diver over the past 12 months.

Brian won Club Member of the Year for his incredible dedication to supporting trainees with pool lessons and quarry trips, as well as always being down the HYC with a smile on his face (and a pint in his hand).

Grace was awarded Diver of the Year for starting on her UK diving adventure this year, for completing her Sports Diver qualification and all with a wet-suit, something that we all know is amazing commitment!

Finally, we give out our Skomer Claw trophy – an award given out for the years biggest faux pas. This one is always highly contested and this year had 5 nominations: 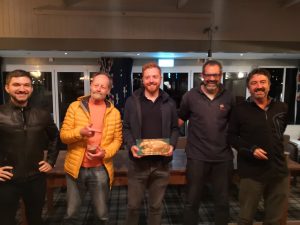 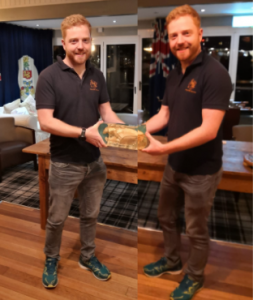 Another fantastic year for Putney BSAC – here’s to many more!

Every year, at our AGM, we hold a photo competition for our budding underwater photographers to submit their best photos from the last 12 months. Our club members are allowed to submit one photo to each of our two categories, UK and Abroad, these are then voted for on the night!

We had 8 entries for the UK competitions that really showcase both our members skills but also the incredible life and scenery the UK has to offer.

Winner of the UK Photo Competition: Sarah with her shot of a Tompot Blenny 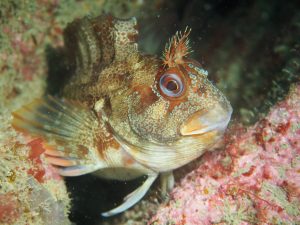 We had three submissions for the abroad category, not bad considering the limited amount of travel this year.

Winner of the Abroad Photo Competition: Nic with her image of a Galapagos hammerhead 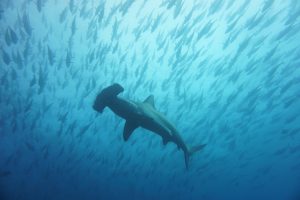 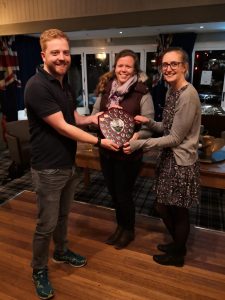 Here are the entries for our 2020 Photo Competition! 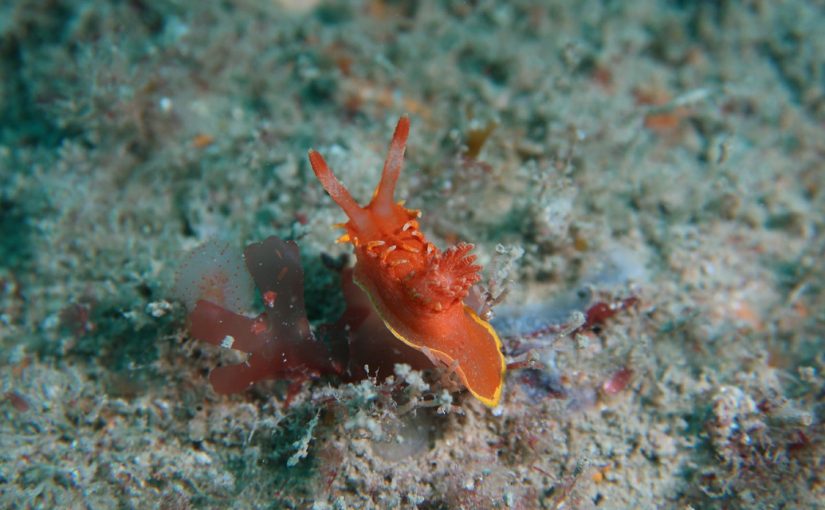 Putney BSAC convened for our Annual General Meeting at the beginning of November, giving us a chance to look back at our achievements of the past year and inject some new energy into the coming year.

Sarah, our Diving Officer, gave a summary of our diving this year; almost 200 dives logged as a club totaling 5.7 days underwater! END_OF_DOCUMENT_TOKEN_TO_BE_REPLACED 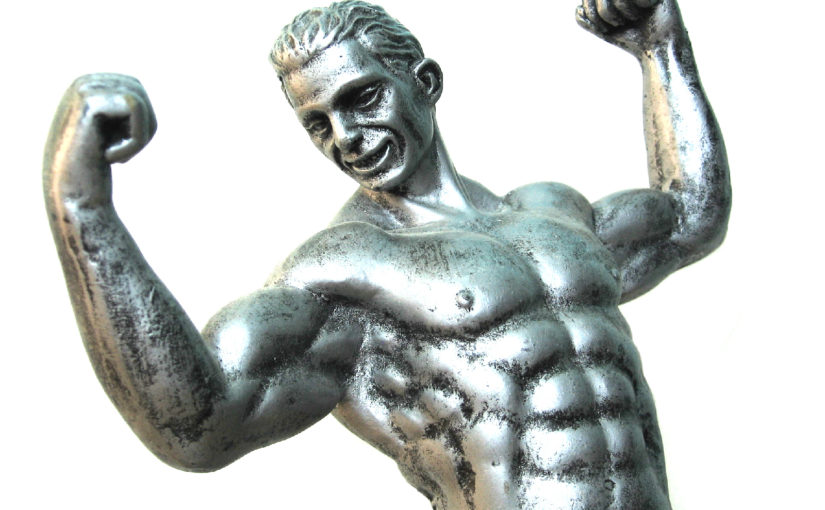 Congratulations to our photo award winners. As voted by the club members at the AGM this week, the best photos are as follows.

END_OF_DOCUMENT_TOKEN_TO_BE_REPLACED 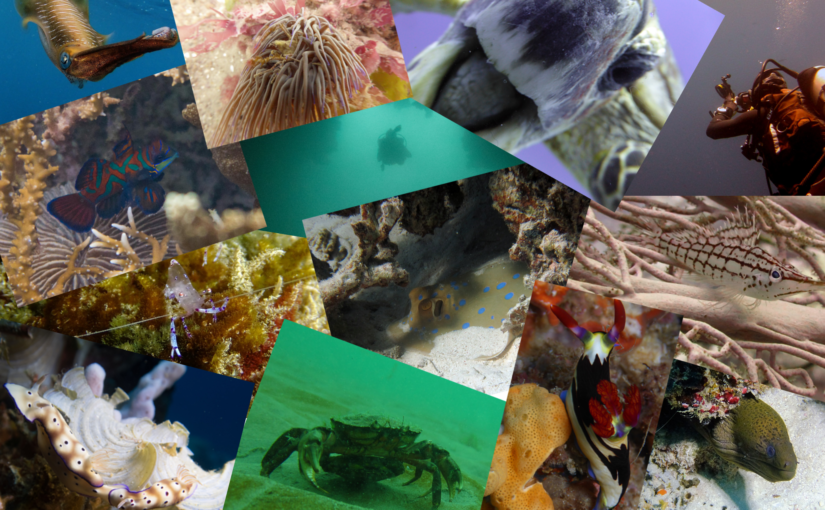