Happy Birthday to Elodie, who completed her Ocean

Despite the high winds and the cancelled dives, so

Happy Birthday to a #putneybsac member of over 10

Huge happy birthday to our chairman Brian, seen he

Today PSAC dived on the SS Lockgarry and a wall di

8 PSAC members and 2 friends from other clubs are

Today is World Oceans Day! A day to reflect and ce

Another week, another Tuesday pool session and #pu 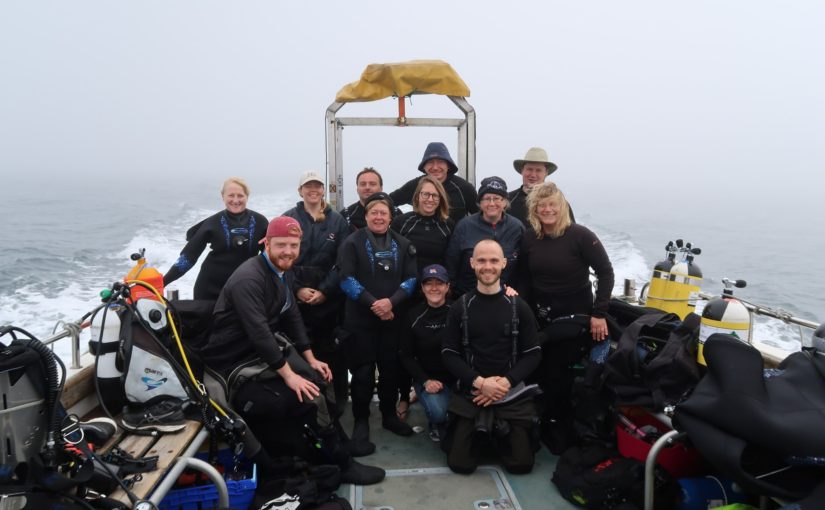 It was a very hot & sunny Friday afternoon when we left Putney to drive the 4-5 hours to Plymouth – sadly that was the last we would see of the good weather. Thunderstorms & epic lightning kept some of us awake on Friday night, but we all made it down to the boat after breakfast on Saturday morning. We were joined by Jules from Clifton BSAC on the Aquanaut boat ‘Outcast’ skippered by Dougie.

We headed out of the marina full of expectation, only to be met by very choppy seas that prevented us from getting past the breakwater. We managed to find a calm spot to jump in and have a good swim around, well except for Liz & Cameron (who introduced himself as Cameron as in Cameron Diaz!) who were clearly determined to get out past the breakwater & were spotted by a yacht who kept an eye on them and radioed the dive boat. With all 10 divers safely aboard we tried to find another calm spot to dive, but the waves had made everything quite murky. The site we eventually dived was very kelpy and didn’t have much to offer in the way of creatures or much interest. Nevertheless, it was the first day, so there was still plenty of optimism for the next 2 days.
We were joined at Rockfish for supper by 2 more ladies; Pippa from Southsea SAC & Carol from iDive & Eastleigh SAC. This was turning into quite a female dominated trip, which was a very welcome role reversal for those of us who have often been the only lady on a dive trip. Unfortunately, it seemed that Rockfish has seriously underestimated how busy they would be on a Bank Holiday weekend at the start of half term, so service was very slow & our first tray of drinks ended up on the floor!
Sunday morning we set out for the Eddystone, after a brief wait while the Membership secretary ran (!) back up to the B&B to retrieve his undersuit (cough!). This time most people managed to surface in the right area, except 2 ladies who were taken by a rather strong current right past the lighthouse & through a gap in the rocks to the other side. Luckily the waves were much smaller than Saturday as their SMB had sprung a leak and gone rather soggy. All aboard & safe again we headed to the James Eagan Layne, though the quite bumpy journey there and back meant that some divers were feeling the worse for wear. Those of us who did jump in, found the wreck as wonderful as ever, with plenty of Tompot Blennies, assorted fish & even a Janulus Cristalatus (Crystal Seaslug) spotted. As we were coming back into the marina & the skipper was ‘parking’ the boat, the somewhat over-enthusiastic boat-hand James made a leap of faith that ended up with him missing the pontoon and falling into the water. Luckily unhurt and with his phone in a waterproof case, he managed to climb up a nearby boat ladder on to the pontoon to cheers & a round of applause.
That evening was spent at the Stable for pizza, pies & cider– some even managing to have pizza for all three courses! A few of us had a nightcap on the way home at the Pub on the Hoe walking home in the light drizzle. From there the weather pretty much went downhill – the next morning we woke to fog. In the spirit of optimism, we ventured out to the Mewstone to check if it was clearing and made the democratic decision to go to the Persier to see if it was ok to dive. We gave it a good chance, but decided to leave it until another day. On the way back as we passed the Mewstone again, the fog had cleared around the harbour and Whitsand Bay – you just never know what the weather is going to do!!
All in all, it was a good weekend – we made some new diving friends and enjoyed a weekend of mostly diving & eating!!