Huge thanks to our friends at Bracklesham Bay for

Many congratulations to our DO @michal.benko.94 wh

A triple threat Tuesday for @putneybsac at @putney

Fantastic weekend on the Wey Chieftain IV in Weymo

Happy Birthday @timjwatson1 ! Hope you have a grea

Happy Birthday to Brian, one of our longstanding m

So great to be back training new members at the po

Massive congratulations to @markljg on becoming a

This week is National Volunteering Week so #putney

The sun came out and that means #putneybsac were a

Happy Birthday to our fabulous chairman Cameron! I 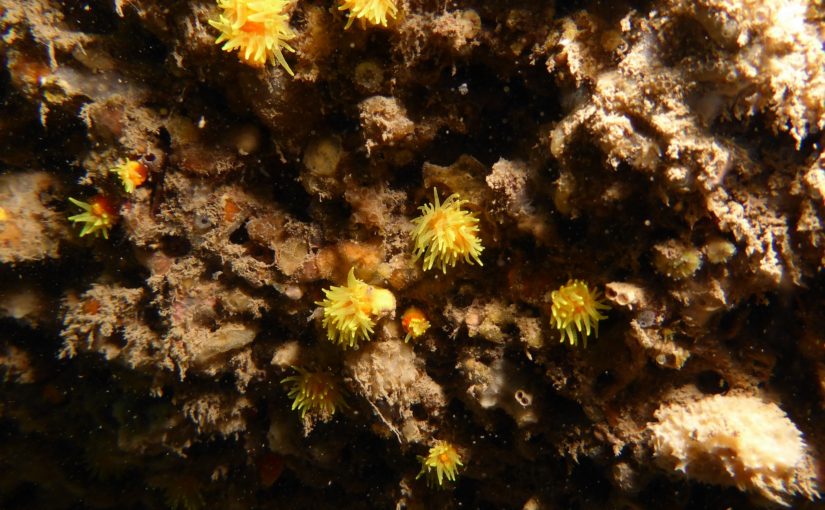 This time last year, eight intrepid divers got ready to make their way down to the Dorset coast, to a small fishing village called West Bay (site of the TV series Broadchurch). The plan was to dive some of the well-known reefs in the area, searching for pink sea fans, and the elusive sunset cup coral. Sadly, the weather gods were not with us and the trip was cancelled, so we found ourselves preparing once again for a second attempt this year.

West Bay is a great location to spend a weekend. You can walk everywhere in about five minutes, and life moves slowly. Our group of eight had booked two caravans in the caravan park – probably the biggest thing in the area – which provides a ample space for relaxing after a day’s diving. and the diving was pretty epic, let me tell you.

Day 1 saw us on the East Tennants and Lanes Ground reefs. Talk about searching for pink sea fans – we couldn’t get away from them. Good buoyancy control is the order of the day, as sea fans are very delicate, taking a long time to grow, and living for a very very long time (50 years+). Sea fans aside, the variety of life on the reefs off West Bay is simply incredible. Everyone was a little disappointed that, diving on air, our no-deco time forced us to surface earlier than we would have liked!

On day 2, we tried for the Sawtooth Ledges, a reef topping out at about 17m and bottoming out at about 24m. The result is a simply amazing wall covered in life, with a number of overhangs caused by fissures in the rock. and in those fissures…more sunset cup corals than you can imagine! Despite the name, the corals really hate sunlight, which is why they grow under the shaded overhangs. I don’t know the scientific reason for it, but I secretly suspect that they don’t want any competition for the brilliant colours they display. It’s hard to imagine that you’re not diving in the tropics when you see things this bright and colourful. In fact, the dive was so amazing that we decided to do the Ledges again for the second dive!

The weather had closed in by the time we surfaced, but at that point I don’t think anyone cared. It had been a brilliant weekend, and all that was left was a trip back to the caravans for a shower, then home.