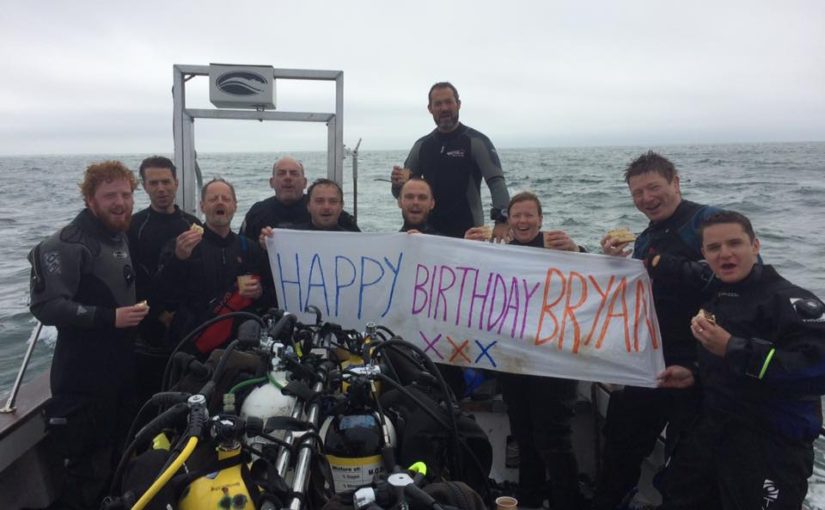 Friday 10 July saw a group of nine divers from Putney SAC heading down to Swanage for a cold, wet weekend. and that was out of the water! The drive down was a pleasant one, followed by a sampling of Swanage’s finest kebabs. Which was apparently a safer bet than the Chinese, the only other place still serving food. Yikes.

Our plan for the weekend was to dive in the 30m range, the main aim being to visit the very well known wreck, the Kyarra. Although the brief sunny spell of weather had passed earlier in the week, being British divers it didn’t dampen our excitement. We were also joined by a local pair who are coming to Lundy with us later in the year, and who made a great addition to our group.

The viz wasn’t entirely on our side for this one. Dark and murky conditions made for a challenging first dive on the Kyarra, but a rewarding one nonetheless…although more than a few divers reported bumping heads with bits of the wreck they weren’t expecting. We got a 30-40 min trip out of it, and back on the boat everyone was still pumped up for the afternoon outing.

But of course, being hungry divers, before heading out in the afternoon we visited the Swanage Fish Festival, which was being held right by the pier. Most of us had been spoiled by the tasty food prepared by our B&B hostess, which served as a quick but filling lunch, but some still managed to pack away the delicious market food during our surface interval.

The afternoon dive was a drift along the Peveril Ledges. It just goes to show how conditions can vary on one site – when we did this one last year the currents made us fly along the seabed, but this time round it was a much more sedate and relaxing experience. The catsharks that we saw obviously thought so. They looked very chilled out and unphased by us lumbering divers floating over them.

With the diving done for the day, all that remained was those other two vital activities on any diving trip – eating and drinking. First stop was the fish festival (again), followed by quick showers and then the pub before dinner. I probably don’t need to tell you that we all slept very well that night.

Sunday morning started *really* cold and miserable, so it was doubly lucky that the B&B was serving up a full English for breakfast. On a diving trip it counts for zero calories, don’t you know. Although more than a few people were probably wishing they hadn’t eaten quite so much when we got out on the water – some very big waves made for some very queasy divers. But that’s the beauty of getting in the water – once you’re down a few metres you don’t feel it at all! Shame the air in a tank is limited really.

We took the decision to dive the Kyarra again. More punishment, you might be thinking? Actually, the dive was even better than on the previous day. We had the wreck to ourselves, viz was better, there was less bumping of heads…everyone came out saying that they would do it again! It’s a big beast and has plenty to offer.

and then we got cake. It was the skipper’s birthday, so after we gobbled down this unexpected treat we posed for a shot on the boat with a ‘happy birthday’ banner raised high. You can see some very happy divers in the photo heading this post.

After a surface interval where pretty much everyone re-visited the fish festival, it was back on the boat for the last dive. and can you guess what we did? Peveril Ledges again! and just like in the morning, conditions had improved and we got another fantastic dive in. Catsharks were seen, nudibranchs, lobsters and crabs…and one of those even made its way back on to the boat and into someone’s car (the crab that is, and I’m pretty sure it didn’t walk there, if you know what I mean).

All in all the weekend was a great success, despite concerns about the weather. Special thanks to Swanage Boat Charter – nine satisfied divers = job well done. Although this diver is already thinking about the next trip!