50ty Birthday Cake. With big thanks to @saraheturp

Putney BSAC turns 50 today! Even though a big part

Despite the weather ruining the AD training, three

An epic dive trip is only achieved when you have a

The pools have reopened and we are making the most

Another sunny day was enjoyed at @standrewslakes b

Happy Birthday to not one but two #putneybsac inst

It wouldn’t be St George’s Day without an inst

On Earth day we remember the harm litter is doing

After the weather ruined our day trip to Swanage,

What a beautiful day to return to diving! 6 lucky

Tuesdays used to our pool and pub night but now it

Flash back to when #putneybsac went diving in Ply

This week #putneybsac hosted an evening with @rnli 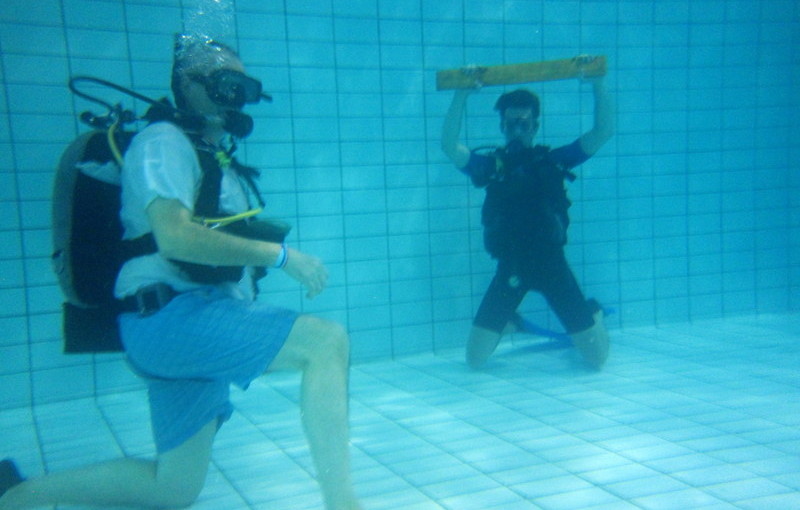 The Pool Olympics took place this week at our usual Putney Leisure Centre swimming pool. The object of the event is to compete in a few ridiculous games for the grand prize of a box of chocolates. The word olympic is said to be a misleading magnification of the event’s true nature.

This year’s turnout saw the Dolphins compete against the Geriatrics with a mix of Putney BSAC and Cosmos BSAC in both teams.

A brutal first round of three-legged snorkelling saw the Dolphins steal the lead with a well coordinated and blindingly fast dash across the surface. There was competition, there was banter between the teams, it was serious and the game was on.

The Dolphins’ lead would be endangered in the next round, though, as their underwater running involved some quite obvious cheating. The objection was overruled and the Dolphins were handed their second win, for reasons I cannot disclose.

Passing the plank came afterwards, which saw the Geriatrics execute precision buoyancy in transporting critical lumps of wood across the swimming pool floor. The same cannot be said for the Dolphins, who’s strategy was just to float to the surface. A Geriatric plank-transporter can be seen to be celebrating with their payload, probably unaware that the Dolphins had won yet another round, despite the questionable tactics.

The last round was the most intense, aptly named balloon cocoon, the object of the game is to take balloons from the surface down to your team’s box on the floor, it’s acceptable to upturn the opposition’s box in order to reset their score and the team with the most balloons in their box at the end of the round wins. The Geriatrics cashed in their score of three balloons early on, nobody’s really sure if this is allowed and confusion ensued. After some milling about to determine whether the round was over, suddenly it was all about the Dolphin’s box, and all the participants flocked to it in attack, defence and I’ve no doubt some perplexed soul was doing both. With no agreed way of signalling the end of the round, tired divers surfaced one by one and the box came up empty.

Alas, the last round’s score was irrelevant as The Dolphins had already won. They were declared the winners and the prize handed to them, which was nobly shared amongst all pub goers.