Scapa flow is easily one of my favourite dive destinations. I’ve been banging on about organising a PSAC trip since my first visit in the centenary year of the scuttling of the German High Seas fleet back in 2019. The trip went in at our dive planning meeting back in 2020, leaving plenty time for people to get dived up and get comfortable with twinsets and accelerated decompression to make the most of our time there.

The journey for most of the club started very early on Friday morning with a 13hr journey up to the Weigh Inn in Scrabster for a much-deserved pint and a bite to eat to kick off the trip. We were seven strong from Putney SAC (me, Charles, Michal, Helen, Mark, Andrew and Leszek) three from Hellfins SAC (Jon, Matt and Nithin) and one from Warrington SAC (Mike).

A nights’ sleep and a Northlink ferry later everyone arrived at our home for the week MV Karin – skippered by John Thornton, a veteran skipper of Scapa Flow and a very accomplished technical diver who was part of the 1997 expedition to HMHS Britannic. Once everyone was unloaded and set gear up, we headed to the Ferry Inn for a few pints before heading to the local Chinese to eat onboard. 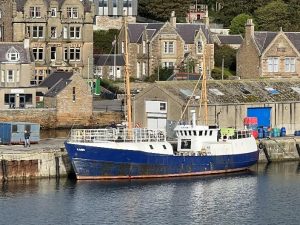 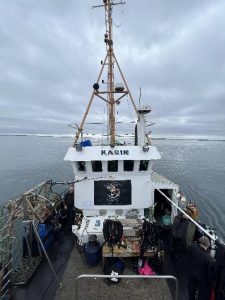 The following day started our diving off on SMS Dresden, one of the four cruisers still on the seabed in the flow. The visibility was not amazing, but everyone was happy to get on their first piece of WW1 rust of the trip and shakedown any nervous apprehension. Dive two took us to SMS Karlsruhe, another cruiser in about 25m of water. The visibility was much better, allowing the main sights of the 5.9” casemate guns, anchor capstans, teak decking, rudder and the infamous armoured control, where the door had fell off and trapped a diver around 20 years earlier, a few minutes of decompression later and everyone was back on the boat for some celebratory beers… first day of Scapa complete! 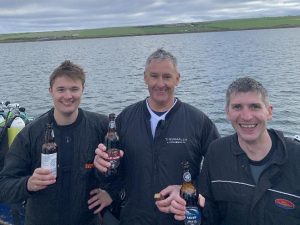 The wind was scheduled to increase overnight, and it sure did. We still managed to get out for a lumpy dive on the F2 and YC-21 in the lay of Hoy, but with a bit of struggle getting back on the lift, the days’ diving was called, and we headed back to Stromness. Eager to take in the Orcadian sights, we headed over to the Italian Chapel, built by Italian prisoners of war and maintained in great condition to this day… we then obviously headed to the pub! 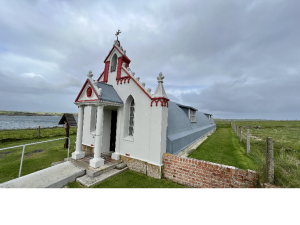 Day three saw the wind die down and we were back out to the high seas fleet to carry on with our cruisers, dive one was SMS Cöln in around 36m and dive two was SMS Brummer in around 35m. Both similar dives plenty of 5.9” guns to see if you have a keen eye and both have their standout differences, most noticeably the bridge rail and search light iris on the Brummer, and the machine gun mounts and armoured control on the Cöln. Sadly, the Brummer is showing significant signs of deterioration even in the couple of years since I first dived her. 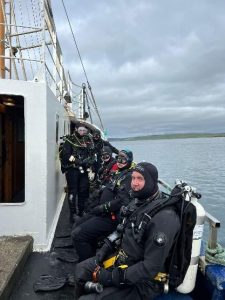 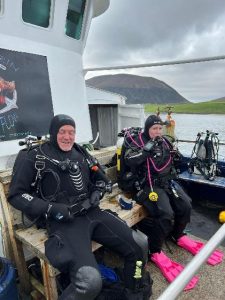 Day four brought us flat calm weather and we got straight on to one of the “big boys” of Scapa, SMS Kronprinz Wilhelm, a König class battleship. Dropping down the shotline we landed on the hull, then headed over the side following the line down to the 12” guns in around 38m of water. I could hear Charles exclaim “they’re f*ckin’ huge” through his regulator… they certainly are a highlight of Scapa flow and my favourite sight on the trip. Dive two brought us to the UB-116 in Hoxa sound, visibility was easily 10m on the white sandy bottom allowing some great pictures on the conning tower (big thanks to Jon for lining off to it!). Dive three… yes dive three, took us to a small fishing boat called MFV Responsive near Burray to catch up on the lost dive from day two which was a great dive to end the day, lots of life and would be a great option in bad weather.

Sadly, the stern toilet had become blocked the previous day and caustic wasn’t freeing the blockage… but not to fear “turd-buster” Denby was on the case and had the pipe unblocked in no time, despite John shouting “put your regulator back in!” 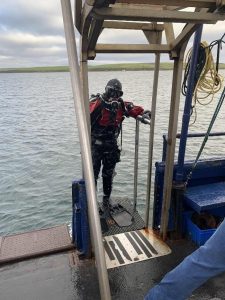 With the bog unblocked we headed to Burray to overnight in a different port, visiting the Sands pub for a nice meal and yup, you guessed it some more beer!

Day five was a great day, possibly my favourite wreck ever – SMS Markgraf and the one that has always eluded me on previous trips – the blockship Tabarka. The Markgraf is another König class battleship sitting overturned in around 44m of water, we all took variations on the classic route down the anchor chain to the gun-run and on to the officers’ accommodation with intact portholes partially open. We then headed onto the hull to see the gigantic rudders and then bagged off very content with the dive. The Tabarka was an excellent second dive. Gin clear water in around 15m, but the tides run quick. We all jumped in negatively buoyant and headed straight inside to take a look around… this is a very photogenic wreck!

Once up from the dive we headed back to Stromness with the sad realisation that we weren’t going to get out for our last day of diving. The winds picked up a hell of a lot, blowing F10! We sheltered most of the day in a local café, then headed over to Kirkwall for a curry before waiting for our evening ferry to Aberdeen (which was delayed for 3 hours due to bad weather).

All in all, a great trip with great company. It was really nice to have two London clubs come together and of course my dad, who has probably done more diving outside of Capernwray this year with PSAC than he has done with the Warrington club! 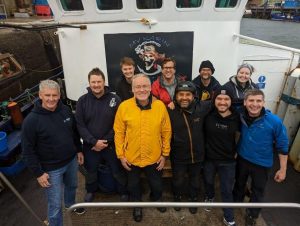