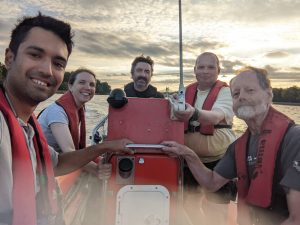 In conjunction with Steve Gibbons I have been running a series of boat trials both on the river and the sea. After eventually getting the broken bolt drilled out and a new bolt fitted and after checking we had no leaks it was time to get the boat on the water.  So on Sunday 17th July we had the1st trial down the Thames to Richmond lock after asking to go through the fuel tank emptied on us so after apologising to the lock keeper we decided with the fuel we had left on the boat it was time to turn around and head back to Putney, with a stop at the White Hart in Barnes for a swifty where George joined us (We now know we can fit a bike on the boat).

Crew Steve, Mark, Paul, Brian and for a bit George

On Sunday 7th August we had the 2nd trial launching from Bracklesham Bay it was very quickly obvious that although reliable the boat is down on power, so our attempts at project Florida was doomed to fail. We then headed in to Chichester harbour for a bit of practice in boat traffic, then back to Bracklesham Bay for boat recovery.

Thursday 18th August saw us launching on the Thames. As we thought it may be a problem with Fuel we were using a spare tank connected directly to the engine thus eliminating any problems with the fixed fuel tank, fuel lines, fuel filter and primer. Unfortunately, this was not the problem but we are now are step further by eliminating these. It was a nice evening so rather than just give up when we realised this wasn’t the solution, we did a little trip down the Thames, giving more people experience with Femti. Once the boat was safely back at the HYC a post trip pint in the Boathouse was the order of the day.

We will continue to look at the lack of the power we have a few ideas and hopefully be able to get her out diving before the year end.