In July 2021, just as Covid looked like it was starting to go away, Egypt opened up its borders again to divers. With it, a wide array of liveaboards, inaccessible for so many months, looked an enticing way to kick start the 2022 diving season. With a week of leave locked in for me over February half term, I announced at our dive planning meeting in October 2021 that I would be going on this trip, and anyone else was welcome to join me. A few people expressed some tentative interest, but ultimately Byron was the only other person who was willing to take the Covid risk. And as Omicron tried its hardest to ruin Christmas, it felt for a while as if everyone else in the club were the smart ones. 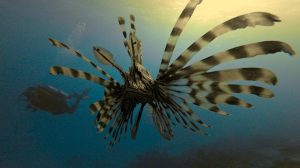 Luckily come February, not only had Omicron been dealt with, but the Government had decided that Covid travel testing was also a thing of the past, so we boarded our flight to Hurghada. After battling our way through the airport scrum, we got our visas, had our passports stamped and were taken to the M/Y Firebird – home for the next week. On board we met our dive guide, Chris, British friends Helen and Peter and solo Polish diver Arec. We were told four more Austrian divers would be arriving during the night before we set sail in the morning. 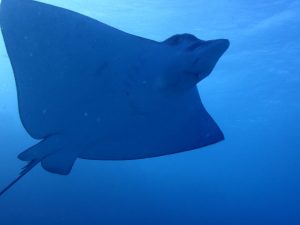 Our first check dives were at Gota Abu Ramada reef, a short hop from Hurghada. We each demonstrated that we could complete all our drills (some more successfully than others) and saw an Eagle Ray, Spotted Ray, Barracuda and Lion fish. We also got to know our group – Arec was more at home in the water than on the boat as he swam laps around the rest of us, while Helen and Peter dazzled us with their amazing photography skills. We then got back on the boat for a vomit-inducing all-night journey to the Brother Islands. After seeing a school of Banner fish at the Little Brother, we then completed two dives at the Big Brother, with a trip on to the Island and to the top of the Lighthouse in between. 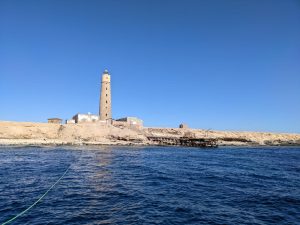 The next day was our first wreck of the week (it was the Wrecks and Reefs Itinerary after all) as we dived the Chrisoula K. After a photo by the prop, we went in to the hold and finally to the engine room. A fantastic wreck. After breakfast we did the Giannis D, again going in as far as the engine room. Thank goodness for Chris, our amazing guide, as with the ship lying at 45 degrees on the sea bed, we all would still be inside now without his excellent navigation. After spying some dolphins on our way back to the Firebird, we ate lunch on our way to the SS Thistlegorm. 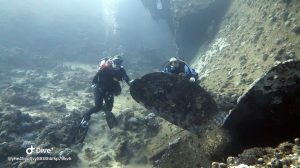 Our first dive in the afternoon we circumnavigated the entire ship, seeing the prop, the guns on the stern, tanks and motorbikes. Then that evening I did a night dive with Peter, exploring the main superstructure. It was like diving in an aquarium with fish life all around us, however unlike an aquarium the current was incredibly strong and we both looked like flags in a strong breeze as we hung on to the boat line during our safety stop. The following morning, we penetrated the lower cargo hold while after breakfast we did the upper cargo deck, kitchen and bridge. 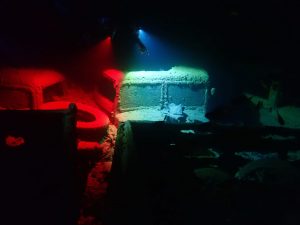 And so, the wreck part of the itinerary was sadly completed, as the wind (and therefore current) picked up for the rest of the week. Next, we ventured to Umm Ush reef, where we saw eels, nudibranchs, gobi and urchins during the day, in addition to hermit crabs, cornet fish, feather sea stars and a puffer fish that night. We then visited Siyul Soraya and Siyul Keber the next day before a couple of dives at Shaab El Erg, where we saw a massive Napoleon Ray and a Napolean Rass. We finished up the trip at Umm Gamar before heading back to dry land to off-gas with some beers at an all-inclusive hotel! 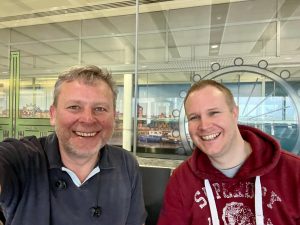 Many thanks to Byron for keeping me company all week, to all the boat crew for being amazing, and to new friends Helen, Peter and Arec.