On the last weekend of July going into August, 12 Putney BSAC divers headed down to Brighton for a weekend of diving with Channel Diver. 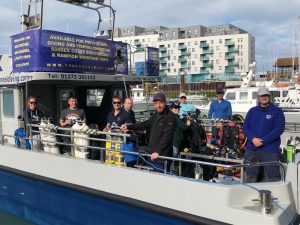 The first dive on the Saturday was a rather novel dive on one of the Rampion windfarm columns. The column met the seabed at a depth of approx. 28m and was covered in mussels, with dozens of starfish surrounding the column at its base, as well as little congas under the supporting beams. Some PSAC’ers were lucky enough to have a couple of jellyfish for company on their safety stop. This was followed by quite a low visibility drift dive at 11m depth.

The Saturday evening was rife with cake, celebration (and a glass of champagne each) as it was the DO’s birthday!

On the Sunday, the first dive was a 27m dive on the Fortuna wreck. Upon dropping onto the wreck down the shot line, some divers couldn’t even see the wreck due to the immense numbers of fish surrounding them! After we descended through the fish, we had a very enjoyable dive moving along to the bow and investigating the wreck before coming back up the shot. This was followed by a better vis drift dive along a rocky shelf which was teeming with life.

Some of the group took advantage of the good weather and being at the seaside to take an extra day to relax before heading back, with the rest of the group getting an unusually short duration trip back to London following a great weekend of diving!