After a successful RIB trip to Newhaven last weekend, 5 members of Putney SAC decided to take the RIB down to Selsey to dive a wreck that we had not dived before (spoiler alert – it was excellent!). 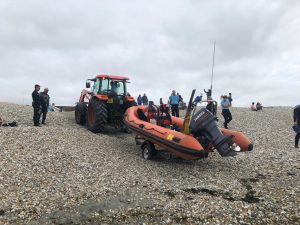 The wreck in question was the Brigitta or “Teapot” wreck as it is known locally, its name owing to a found item by Selsey Bill SAC. Although never officially confirmed as the Brigitta, the cargo and location of its sinking mean it almost certainly is.
The Brigitta was a steam Cargo Coaster carrying coal from Barry to Dieppe and she was mined and sunk in December 1917. She now lies upside down in around 16 to 17m of water close to the South Pullar Cardinal Marker Buoy. Her stern is largely intact with a rather large propeller still in place… definitely my highlight! The boilers are very prominent and stand very proud of the seabed. There are also plenty of great swim throughs and lots of congers, crabs and tompot blennies hiding in the holds. Plenty of fish too.. don’t ask me which variety. The visibility was an incredible 8m and very light down there.
Notes for future dives:
The second dive was a drift along Bracklesham Bay with not loads to see, but there were a few dogfish and brittle stars to keep us entertained.
Big thanks to Steve for towing/coxing and Nick, Brian and Adam for making it a great day out!
Credit – George (Membership Secretary & trip organiser)