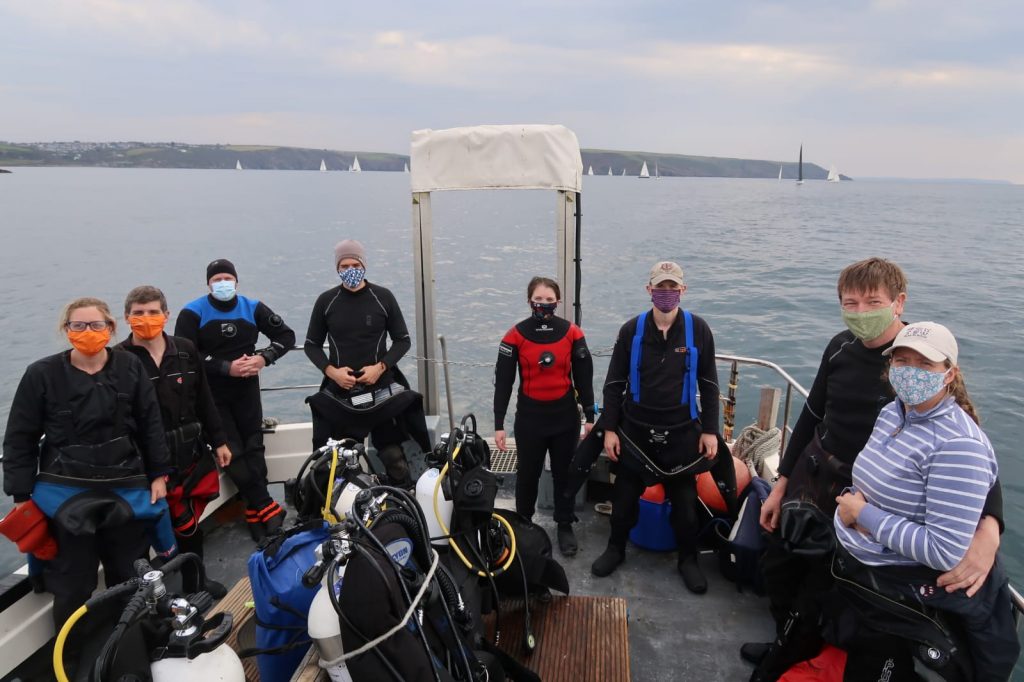 It was a last minute dash for Michal to join us for the weekend as a space became available at the last moment (Friday afternoon) and he had only 1 hour to finish work and pack up all his gear ready to get a lift down with Neil who kindly took a small detour. I suspect he had the dive gear packed all ready to go!

Once we had all made it down to the luxury caravans at Bovisand Lodge and after a night listening to the wind howl, we motored out of Bovisand harbour at a very leisurely 10am with fairly calm seas.

First up was the HMS Scylla, now absolutely covered in ife – Tim and Michal stumbled across a John Dory at the bow, and the rest of us enjoyed the pretty good vis along with lots of fish. A hot drink and a pasty later, we were back in on the James Eagan Layne – one of the best dives in the UK – with lots of friendly Tompot Blennies, the occasional Congel Eel and crabs.

On our return, suspected tuna were spotted in the distance which turned out to actually be a school of common dolphins. We followed them and watched them jumping and swimming around the boat to everyone’s total delight – definitely the highlight of the trip!

A small mention has to be made of the cylinder incident that happened as the boat was being unloaded on Saturday evening when the slope of the harbour wall meant that a carefully laid down cylinder managed to roll around 90 degrees off the harbour wall and into 2m of water!! The salvage price was 4 cans of Guinness (bargin!) and the not amused owner was reunited with it fairly well undamaged the next morning.

That evening, we continued the fish theme at Rockfish enjoying hake, mussels and the veggie burger along with the (allegedly but hard to get hold of) unlimited chips. We all turned in at a boringly sensible hour for a Saturday night as we had ropes off at 07:30 the next morning.

The trip out to the Persier was a bit bumpy and some divers got completely wet before we had even arrived at the site – thank goodness for drysuits! There was a bit of a current running, and not everyone managed to find the wreck but appetites were whetted for this fantastic wreck – it’s top of the list for the next trip accompanied by Nitrox to make more of the dive.

Final dive was on the Mewstone for a chilled out pootle around the ledges (formed by an ancient riverbed) looking out for the many crayfish hiding in the cracks. There were also a lot of spider crabs around, having not been eaten by the French this year due to lockdown.

As soon as we got back, the next trip was booked in for May 2021 – fingers crossed we can have a full boat and a lot more time underwater.