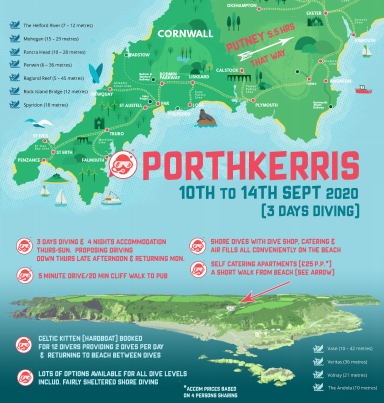 Diving & Dive planning in Porthkerris, Cornwall is as easy as it can possibly be. The dive centre is  on the beach for hiring equipment and air fills; the shore dive has a reputation as one of the best in  the UK; the two dive hard boats are moored just off shore where a beach cafe resides and the  accommodation for divers is just up the hill. The only issue is probably the distance to Cornwall  (arriving in darkness and travelling down ridiculously narrow country lanes was interesting) and the  Covid regulations which limited the numbers on dive boats and in the accommodation.

The whole weekend proved to be quite relaxed, mirroring the general atmosphere down there and  the nice weather we had. Even Dave our skipper had the air of a chilled out beach surfer about  him.

Most of us hadn’t done too much diving this season so I think we had all forgotten just how heavy  all the kit was, especially when having to add the usual few kilos to compensate for the salt water.  We didn’t need to take our equipment far to the waiting boat but over the rocky beach it felt a bit  like walking on a travolator in the opposite direction.

The sea off Porthkerris is a mixture of reefs and wrecks, the former responsible for the latter. Even  a kilometre off the coast the ‘Manacles’ (a number of sharp reefs both just above and below the  water) have snagged many ships heading to Falmouth or Southampton.

We dived the Mohegan (29m) and the Volnay (20m) both of which were marked by giant boilers.  The visibility wasn’t great (maybe 3-4 metres) but there was plenty of wreckage left. We dived a  reef called Carn Du. Think it should be Carn Dubh’ but maybe that’s my Irish language bias. Saw a  lot of marine life including one huge crayfish (photo below).

On our last day we had a change of scene and dived the Helford River. We were dropped in the mouth of the river and due to the tides we had a gentle drift out into the sea passing lots of spider  & hermit crabs, cuttlefish and even a resting thornback ray. We had heard great things about this  dive and the dive centre noted that it was their most popular dives, but I think another reef such as  the ‘Pinnacle’ might have been more interesting (next time).

There is a walkable pub in nearby Porthallow but over this weekend I think we all enjoyed the self  catering more, mainly complements to Pradeep and Toni in the kitchen and John’s prowess finding  scallops on the river dive.