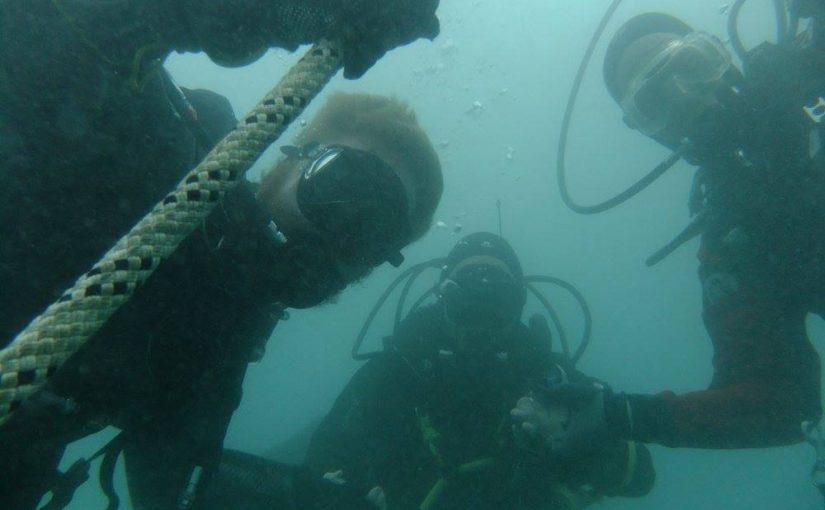 Our destination: Lundy, an island in the Bristol Channel. The trip: almost a year in the planning. The anticipation: high. Lundy has reefs, wrecks, seals, and that relaxed island life. What more could you ask for? Well, some decent weather and a working compressor would be a start.

It was with no small amount of trepidation that we set off for Ilfracombe on Friday 23rd September, the first leg of the journey that would see us travelling to Lundy on Saturday and returning four days later. The weather forecast had started off the week badly and was getting worse, with gale force winds predicted to blow the entire trip. Whispered echoes of the club’s previous Lundy excursion did the rounds, the fear being that now, as then, the diving would be drastically curtailed (they’d only managed one dive over the four days last time). Then, Thursday lunchtime, the dire news came: the compressor on the island had blown. No fills available for our tanks. What could we do? The only option, as the crew had planned to return to the mainland after day two anyway, was to take enough tanks each to last two days’ diving. That’s forty eight tanks for twelve people. Ouch.

Despite the potential setbacks, Saturday 24th September found us all moored in the harbour of Lundy at around midday, having survived the (very rough) crossing and with a hefty stack of cylinders occupying the middle of the boat. We’d arrived! The advantage of diving off an island is that there is usually a lee shore with shelter from the wind and waves. The wind tried its damndest to blow into every nook and cranny, but we still managed one dive in a semi-sheltered cove, hoping to see the (as-yet) elusive Lundy seals.

It wasn’t until late afternoon that we made it to our accommodation, the Landmark Trust-owned Millcombe House. and what a house it is! Built in 1835, it looks down a wooded valley and out to sea…and luckily is the first building you come to after the steep ascent from the harbour. It is built of stuccoed granite with a grassy terrace out the front, and as diving accommodations go, it is damn luxury. Our DO had had the foresight to prep a huge amount of bolognese for our first night’s dinner, so it was a simple case of rustling up some pasta, heating the main course and then getting twelve hungry divers around the dining table to stuff themselves silly.

The weather for the rest of the trip was both friend and foe. We had two days of blazing sunshine and calm seas; thankfully so on the last day when we returned, with the crossing much smoother than on the way out. The third day was much the same as the first, but even so, we managed to get a total of eight dives in on some truly cracking sites. and yes, those elusive Lundy seals made their appearance in force.

It wasn’t just the diving that made this trip great, however. Staying on Lundy is an absolute must if you are planning a longer trip there, and the island’s only pub is well worth a visit! Huge thanks is also due to the crew of Obsession II, the charter boat we used. The skipper Leigh and crewmates Stuart and Andy were just fantastic. I’ve not been on such a fun boat before. Although I suspect part of that was down to the quality retro tunes of Lundy FM, which were a constant shipmate during our diving days (yes I did have a dance, I couldn’t help myself).

Although it was only a couple of weeks ago now, it seems like such a long time already. Guess it’s on to planning the next one!